On one of my trips to the library a few months ago, I saw The Rules of Magic in the new books section. It caught my eye because of a bright yellow cover and also because of “magic” in the title. After I got home, I googled the book and read that it was a prequel to another popular book by Alice Hoffman called Practical Magic. Practical Magic was written in 1995 and was made into a movie starring Sandra Bullock and Nicole Kidman. Even though the movie by itself did not have flattering reviews, the book had a lot of good ones.Albeit everyone saying that you did not have to read Practical Magic before reading The Rules of Magic, I wanted to read it in the order that it came out. So, I whipped out my Kindle and got Practical Magic and read it as fast as I could in the little time I got during the week.

Practical Magic started out really strong. It’s a story about two orphan girls, Sally and Gillian Owens who live with their aunts and how they grow up accepting who they are. “The aunts” as they are referred to till the last act of the book are part of a long line of beautiful Owens women with gray eyes whose matriarchy escaped the Salem’s gallows by magicking herself out of the noose. I found the storyline of Practical Magic lacking when I finished it. This also dampened my expectations with regards to The Rules of Magic. The aunts whose names are revealed as Frances, called Franny and Bridget, known as Jet are the protagonists of the latest book.

I started reading The Rules of Magic a month after reading Practical Magic, blame it on the lack of excitement from reading the latter. But it was the best pick ever. I could not put the book down till I finished it. The plot of the book revolves around the life of Franny, Jet and their baby brother Vincent, who was the only male Owens born to Susanna. Susanna Owens ran away from Massachusetts, which is the home base of the Owens family to escape from the stigma which goes with the family name. She flees to Paris and then settles in New York with her psychiatric husband. Susanna and her husband try to bring up the children by hiding their heritage and laying down absurd rules which the siblings question and diligently break. “No walking in the moonlight, no Ouija boards, no candles, no red shoes, no wearing black, no going shoeless, no amulets, no night-blooming flowers, no reading novels about magic, no cats, no crows and no venturing below 14th Street.” 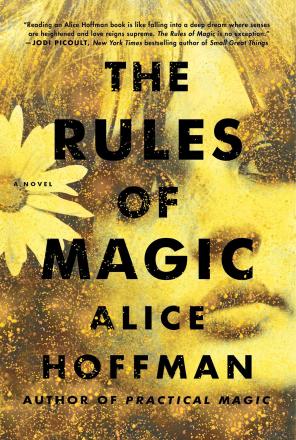 Franny who is pale as porcelain and has “blood-red” hair and has “an ability to commune with birds” and Jet, the shy but beautiful second born mostly abide by the rules. Jet who was born with the ability to read other’s thoughts is cautious and stays out of trouble. But their baby brother, Vincent who is so charismatic from the day he was born – so much so that the nurse tried to kidnap him by hiding him in her coat – breaks every rule which has been laid out by their mother. Vincent is very quick to realize that they are not like every other kid on the block. Everything changed the day Franny turns seventeen and receives a letter from their aunt who lives in Massachusetts.

The letter is an invitation for her to spend her summer in the family manor. Jet and Vincent decide to accompany their sister to Boston, where they meet their aunt, Isabelle. Isabelle Owens provides them the comfort of discovering who they are without being overbearing. From her they learn how to make the very desirable black soap and the rules of magic –

“Do as you will, but harm no one. What you give will be returned to you threefold. Fall in love whenever you can.”

And, from their cousin April Owens they learn about the curse laid on the family by Maria Owens. The curse states, “Any man who loves an Owens is doomed.” This summer sets course to everything else which follows in the book.

The story is set during the time of the Vietnam war and San Francisco Riots. It takes you back to a time when the course of lives was changed by things you didn’t have control over. I am a sucker for stories which start with “Once upon a time” and Alice Hoffman does a brilliant job delivering a heartfelt story about real-life struggle but with the promises of a fairy-tale. My favorite story line is that of Vincent Owens and the legacy he leaves behind. Despite the curse, the Owens children find a way to true love and happiness. This is one of the books I will re-read when I feel like I need a good story.

Here are some of my favorite quotes from the book:

Welcome to The Tiny Storyteller! Here you’ll find content on books, travel, photography and everything in between.